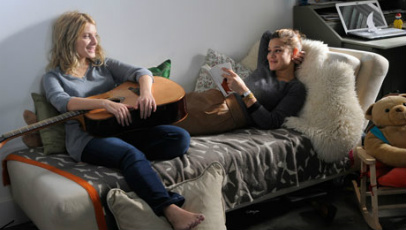 Skeptical musician Lisa (Mélanie Laurent) and wayward bookkeeper Marine (Marie Denarnaud) are sisters. Though not related by blood (Lisa’s mother adopted Marine when her parents died), their bond is like any between two siblings: full of hidden grudges, insecurities, secrets and love. When Marine falls in love with Alex (Denis Ménochet), Lisa feels threatened and pushed aside. But, after a tragic accident lands Marine in a coma, Lisa and Alex slowly begin to grow closer as they come to terms with what’s happened and look towards their futures.

Split into three parts, each focusing on one of the three leads, The Adopted is uneven at the best of times, with the film almost feeling like two separate entities, bound together its eagerness to convey an oft-told message about love and family. Even so, Laurent, who also serves as director and co-writer (aid comes in the form of Christophe Deslandes and Morgan Perez), marshals the narrative well, letting the accident that ends the first section serve as an instigator for the other two. This cleverly works as a way of inspecting the darker aspects of their lives, and presents a more realistic portrayal of the subject matter.

What starts as a frivolous tale of Marine’s copulation with Alex and how that tested her relationship with Lisa, develops into a slightly sharper character-based drama – one keen on analysing how Lisa and Alex cope with the potential loss of a person that’s been so influential to them both. It’s an interesting turn – one that not only allows the audience to emote with the pair as individuals grieving, but also as people brought together by unfortunate circumstance.

As inexperienced as she may be when it comes to directing, Laurent shows no hesitation in her debut, using imagery, differing textures and a mixture of closed and open spaces to help convey characters’ emotions and their feelings towards one another. After all, it’s a story about bonds and the unyielding connection shared between loved ones, so it’s only natural for the execution to accentuate these varying bonds as the characters attempt to weather the storm they have to face so unexpectedly.

Ménochet does well to hold his own in a predominantly female-orientated narrative, and channels a lot of emotion through his body language and facial movement. It’s Denarnaud, however, who steals the film. She plays Marine with a trusted ease as she tries desperately to move on with her life while keeping as close to her sister as possible. Laurent does solid work, but doesn’t have quite the same range as the other leads, perhaps due to her involvement in other aspects of the film.

The Adopted teeters on the edge of schmaltziness for its entire duration, and sometimes veers too far in the wrong direction. But, thanks to a low-key, subtle aura despite some tough subject matter, it prevails more than enough to maintain a steady intrigue.