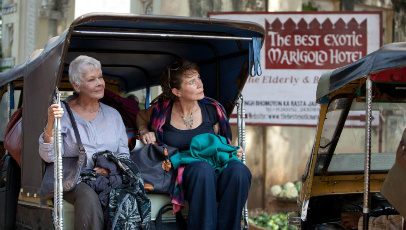 Enticed by the promise of a luxury hotel in the heart of India, seven soul-searching retirees travel half-way around the world in the hopes of a relaxing, less expensive retirement. Unfortunately, when they arrive, not everything matches up to the exuberant brochure. As each of them adapt to their new surroundings (from the culture to the food), their lives start to unravel in interesting, poignant and amusing ways.

Adapted from Deborah Moggach’s novel These Foolish Things, The Best Marigold Hotel is about how, by exposing themselves to a culture as expressive and diverse as India’s, people’s personalities and lives can change in a host of different ways. With seven characters, this is no easy task, but by implementing some neat tricks and not spending too much time setting everything up, Ol Parker’s screenplay works well to introduce and guide each of these contrasting characters as they experience India.

Like in any circumstance, some stories are more successful and harbour deeper emotional resonance and humour than others. Whether it be Evelyn’s (Judi Dench) quest to prove to herself that she can be independent, or Graham’s (Tom Wilkinson) personal journey for forgiveness, these character’s arcs offer more intrigue and coherence than those of the others’, for example Norman (Ronald Pickup) and Jean’s (Penelope Wilton) search for companionship.

It all feels too middling, though, with too much happening to allow for any true investment in what one particular person is experiencing. Most of what these characters are worrying about is frivolous, or in some ways meaningless, and Parker doesn’t quite have the skill to keep things ticking along after the ending has been clearly signposted well in advance. The events that take place after that, as the characters come to their respective life-altering realisations, feels somewhat like filler for a narrative that could have achieved the same result in far less time.

That said, the entire cast deliver fine performances. From Dench’s reflective Evelyn to Dev Patel’s optimistic thinker Sonny, the hotel’s manager, or Maggie Smith’s humorously single-minded Muriel, there’s no let-down in terms of acting. It’s Wilkinson’s love-torn Graham that’s the real stand out, though. His story is one has greater impact not only because of its contents, but also because of the way Wilkinson embodies the broken man in search of absolution.

While is may hold decidedly more meaning for people experiencing their own retirement, The Best Marigold Hotel is caked in too much baggage to engage an audience’s undivided attention for its ridiculously long running time. It may offer up an array of earnest performances, scenery delicately captured by director John Madden and some intermittently engaging stories, but it runs out of steam much too soon to truly dazzle the senses.