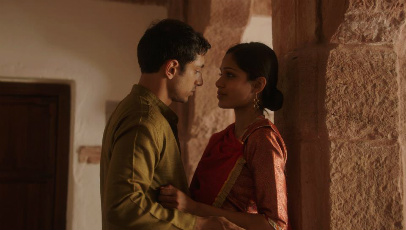 While in India managing a hotel, Jay (Riz Ahmed) meets Trishna (Freida Pinto), a soft-spoken, hard-working young woman living in one of the country’s poorest areas. In a bid to spend more time with her, and improve her situation, Jay invites Trishna to work at his hotel. As they spend more and more time together, their feelings develop and the opportunity to relocate to Mumbai becomes irresistible. However, when Jay’s father (Roshan Seth) suffers a heart attack and they’re forced back to where they started, they discover that their relationship isn’t exactly as it appears.

Adapted from Thomas Hardy’s Tess of the D’Urbervilles, Trishna sees the well known story relocated. The changes accentuate not only the novel’s main theme – class discrepancies, but also acts as a beautiful backdrop with the rolling landscapes of open wasteland bringing the two unlikely souls together and the bustling cityscapes driving them apart. It’s not always for the better, though, as adjustments have clearly been made with the narrative to ensure it remains as susceptible and audience-friendly as possible.

Winterbottom, who acts as both writer and director, isn’t exactly sure what tone to take with the film. At first, it’s a slow-burning romance, with plenty of time dedicated to ensuring we understand both of these characters as individuals, before they embark on a relationship as a couple. As it progresses, and the action is moved to Mumbai, the intimacy is lost and replaced by an unsettling anxiety, which is cunningly used to signal the change in personalities for both Jay and Trishna.

It’s not that this sudden transition is bad – it’s actually a brilliant way to let the differences between Jay and Trishna flourish. It’s more that when the couple are forced to move back, what’s been established is thrown to the fire, as the film quickly descends into madness and utter absurdity. The tonal shifts are too jarring – the film flits between romance, drama and thriller all too easily – to allow for full emotional resonance, especially as the film enters its final third and the characters each commit acts that feel out of sort.

It’s a shame, as without these inconsistencies, and when Jay and Trishna are in the initial throes of their burgeoning romance, Trishna makes for an interesting, and extremely well captured film – one that uses Marcel Zyskind’s stunning cinematography and the low-key, atmospheric score to call attention to the increasing differences between the characters. Unfortunately, as the film reaches its puzzling conclusion it stumbles, thwarting the previous successes. Trishna may be alluring and striking to look at, but the lack of purpose and floundering performances by Ahmed and Pinto ends up leaving you cold.