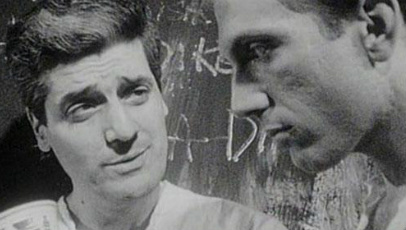 With queer cinema experiencing something of a renaissance in recent years, the 2012 release of Encounters: Four Ground-Breaking Classics of Gay Cinema – made up of short films by Lloyd Reckord, Andy Milligan, Bill Douglas and Peter De Rome – feels somewhat essential. Curated by the British Film Institute, this new collection showcases the very best of classic queer cinema, all the while shedding light on the overwhelming progress the film industry has made in regards to making films that deal with or feature important gay, lesbian, bisexual or transgender characters or issues.

First up is Reckord’s Dreams A40, a film about two gay men (well-played by Michael Billington and Nicholas Wright) who become weary of each others’ take on public shows of affection after being seen holding hands by a young child. Breaking into an argument when they both react to the child’s supposed scrutiny in different ways, they’re both lead to an abandoned house by a police offer, which clearly acts as a representation for their conflicted minds.

Reckord’s experimental drama, which takes place two years before the Sexual Offences Act decriminalised homosexuality, offers up a intimate, psychologically-tinged insight into two men’s differing abilities to deal with the public’s perception of their relationship. Not only does the apprehension felt by one of the men play into the fear felt by all gay men in the early sixties, but it also contributes to an ending that expertly captures the fact that the unease and fear felt by some homosexuals became too much for them to cope with, leading to a life of bribery, disease and, more often than not, death.

Milligan’s Vapors, made in the same year as Dreams A40, eschews a more intrepid illustration of the queer scene of the early sixties, this time focusing on a hesitant encounter between two outsiders (Robert Dahdah and Gerald Jacuzzo) at a bathhouse in New York. Milligan cleverly uses a hand-held camera technique to convey the nervousness felt by both the men, but unfortunately the overtly camp feel fails to add authenticity to situation. The engineered texture of the whole situation fails to create the level of emotional resonance between audience and characters to have the necessary impact and feel as relevant as Dreams A40.

Following Vapors is Come Dancing, a tale of two men who meet in a cafe in what’s hinted at as a gay pick-up. Douglas exhibits a knowledge well above his experience at the time as he uses interesting camera and editing techniques to capture the tenuity within such a seedy act. Both characters, though never showing it, quite obviously harbour different values, using what was then, and still is now, seen as sleazy and dangerous as a way of testing, even rectifying those ideals. Though low-key in its production values, Come Dancing is every bit as bold and daring as the act story it’s telling, especially as the unexpected twist rears its head towards the end.

Also made in 1971, De Rome’s Encounter – the last instalment in this collection – focuses on a number of young men as they make their way to participate in an orgy at an undisclosed location in downtown New York. Constructed like a montage of interconnected dream-like sequences, De Rome is able to convey the heightened desires felt by homosexuals in a world where they had to protect themselves in public, only truly revealing themselves, and all their fantasies, in situations filled with excess and risk. Dark and powerful, Encounter not only bares the honest truth of what it was like to be a homosexual in the early seventies, but also implies the causes of the widespread that followed in the eighties.

As a whole, Encounters: Four Ground-Breaking Classics of Gay Cinema offers a number of deeply interesting insights into the originality of homosexuality in film. Muted at first, filmmakers slowly took more and more risks with their representations, all the way playing into the fears and desires that were coursing throughout the queer underbelly, resulting in the honest, frank and explicit films of our time, which perfectly ties into the collections timely release that coincides with this year’s 26th BFI London Lesbian & Gay Film Festival.