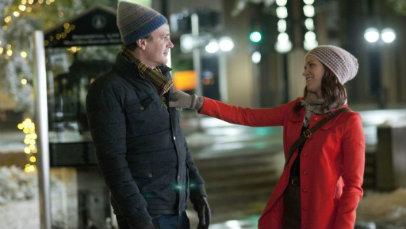 Tom (Jason Segel) and Violet (Emily Blunt) have been blissfully in love ever since they met at a DIY superhero New Year’s party. Wanting to spend the rest of his life with her, Tom proposes on their one year anniversary. But, despite their best intentions, life – new jobs, adultery and mid-life crises – keeps putting off their plans – something they can only take on the chin for a certain amount of time.

Produced by Judd Apatow and co-written by director Nicholas Stoller and Segel himself, The Five-Year Engagement boasts some excellent credentials, and generally uses them to execute a warm-hearted, witty and touching story of the ever-lasting connection between two people and how life often has a habit of delaying plans and causing friction. The way in which it is shot, from a well-maintained, observing and almost homemade distance, allows the repartee and set pieces to feel organic, rather than imposed or in anyway artificial.

The film feels a little extended at times, however, with some of mid-section coming across as flat and uninspired in comparison to the hugely enjoyable, and often unique, opening and closing acts. But the spirit’s there throughout, and the film is littered with many laugh-out-loud moments, ranging from a very adult Sesame Street-inspired conversation had between Violet and her sister Suzie (Alison Brie) and the finale – a fitting end, despite its on-paper conventionality.

It’s also very sweet, which is a welcomed surprise considering the route many R-rated comedies head down. The Five-Year Engagement finds itself in the comfortable hands of the men involved with The Muppets, so it comes as a welcome surprise that there’s an odd air of nostalgia about the place. It often comes across as if Stoller and Segel wrote the script from past experiences, infusing both highs and lows in a film that follows a couple through a more than turbulent five years, as they’re pushed and pulled from all manner of angles.

Its true skill, and achievement however, lies in the performances. Segel is as charming and watchable as ever in his portrayal of Tom, a character who, without the right balance between envy and adoration, could’ve quite easy come across as a sullen, overly confident moron. Blunt, coming off the back of a stand-out role in Your Sister’s Sister, is as charming and effervescent as ever, quite literally and commendably stealing the entire film from under Segel’s feet.

Brie and Chris Pratt as Tom’s friend and Suzie’s new-found husband provide excellent support (Brie especially has some hilarious moments), and a well-selected soundtrack compliments the film well, as the mood and tones change from one end of the scale to the other in a time that feels natural and believable from an outsider’s perspective. The Five-Year Engagement is saved from sentimentality on many occasions due to Stoller, Segel, Blunt and co.’s dedicated desire to create something original and removed of artifice. It’s not entirely bold or life-changing, but it’s a fun and charming way to spend two hours, and should finally certify Blunt’s position in the A-list.