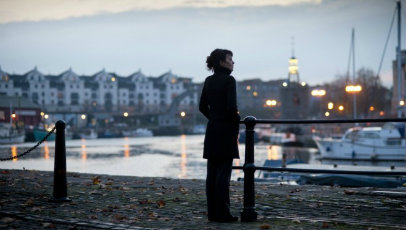 Frankie (Helen McCrory) is a successful, smart and furiously driven aeronautical engineer and part-time lecturer who takes her work very seriously. When she strikes up a relationship with murky student Kahil (Najib Oudghiri), her work ethic decreases in favour of sex-fuelled infatuation. However, as Frankie starts to discover more and more about Kahil (he’s an illegal immigrant and seems eerily interested in fundamentalism), she becomes concerned for both her wellbeing and that of her country, which she’s involved in protecting.

Tapping into post-9/11 issues that are as controversial and discussion-raising as ever, Flying Blind elevates itself beyond minor budgeted romantic drama into a discerning and puzzling directorial debut from Polish filmmaker Katarzyna Klimkiewicz. Slow-burning in its nature, screenwriters Caroline Harrington, Bruce McLeod and Naomi Wallace continually challenge the audience’s perceptions through Frankie’s multiplying speculation and sense of insecurity.

It’s a mostly successful approach, particularly in the way Klimkiewicz places the audience into the situation and makes us ask the same questions as Frankie, achieved through a solid fly-on-the-wall style approach to direction. She uses the juxtaposition of Frankie’s clean-cut and polished appearance and way of living against Kahil’s shabby flat and concealed nature well to accentuate the many differences between them.

Where the narrative’s tone and authenticity waver, however, is in its portrayal of Frankie herself. Made to come across as headstrong and career-focussed at the start, her descent into careless, self-doubting mess at the hands of Kahil never seems entirely believable, despite McCrory’s best efforts to keep the tension intact. It must also be noted that Oudghiri’s portrayal of Kahil is thinly drawn, and the chemistry he shares with McCrory’s Frankie is basic at best – a shoddy effort considering the crux of Flying Blind lies in their tumultuous relationship.

That said, McCrory’s performance is what, in many ways, makes Flying Blind into the remarkably pertinent piece of filmmaking it has become. Her hold on Frankie is sterling, and it’s pleasing to see an actress of her skill offered the opportunity to portray such a fascinating character with a moral compass that mirrors that of its audience, who would arguably have similar reactions and insecurities if they found themselves in her situation.

Flying Blind is a relatively minor film that elevates itself on the basis of the themes explored, McCrory’s unflinching performance and Klimkiewicz’ meritable direction and ability to smooth over such a thwarting screenplay. It’s not exactly the kind of film that’s likely to set the world alight, but it’s made all the better for its low-key disposition and palpitating subject-matter.