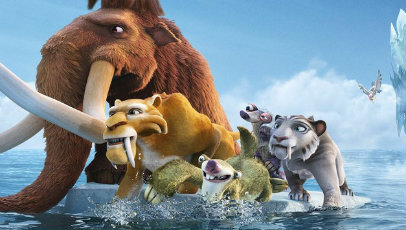 Manny (Ray Romano), Diego (Dennis Leary) and Sid (John Leguizamo) are set adrift on an iceberg after Scrat (Chris Wedge) inadvertently causes the break-up of Pangea. Separated from their oddball family, who rush to escape the forthcoming destruction, they are forced to brave the high seas in the hope of finding a way back home before it’s too late. It’s not all plain sailing, though, as the trio cross paths with a barrage of pirates, lead by the sinister Captain Gutt (Peter Dinklage), who will do anything to stop them.

Sticking to the well-oiled formula affiliated with the Ice Age series (if it continues to make the money, why fix it?), screenwriters Michael Berg and Jason Fuchs have fashioned a narrative that’s basic, easy-to-follow and, as has become a running theme over the course of the series, historically inaccurate. This not only aids with Ice Age: Continental Drift’s irresistible charm, appeal and union with the previous instalments, but undoubtedly raises it, albeit slimly, above the unpardonable Ice Age: Dawn Of The Dinosaurs.

While certainly in-keeping with tradition, the screenwriters’ requirement to keep Continental Drift as family-friendly, breezy (it clocks in at an acceptable ninety four minutes) and harmless as possible, result in many of its downfalls. It’s not that Berg and Fuchs don’t try to instil some authentic fear and peril – both through the breaking up of the continent and the trio’s struggle to reunite with their loved ones – but these elements are all too pedestrian and tied up too predictably to make a lasting impression.

It’s fast paced, though, with the focus constantly switching back and forth between the trio’s high seas adventure and those left behind’s hardened efforts to reach safety. The set pieces steadily feel as though they’ve been replicated from other, better animation pieces, yet the humour and skill of the voice actors cuts through intermittently, with Leguizamo’s Sid, in particular, stealing many of the scenes (paralysing berries have never been so funny), and Dinklage’s Captain Gutt adds a welcomed touch of menace and sharpness to proceedings.

And, while it doesn’t quite do anything to raise the series’ warranted position as an imperfect model of ideal modern-day filmmaking, Continental Drift is visually stunning, with directors Steve Martino and Mike Thurmeier using the animators’ clear skill of fabricating picture-perfect scenery and intensely colourful surroundings to somewhat legitimise its existence. It’s only a wish that with the inevitable fifth instalment, the screenwriters would work more closely with the directors to create a film that’s every bit as heart-warming as it is visually august.