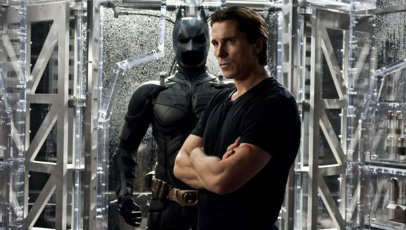 Eight years after the grisly events that resulted in the death of Harvey Dent, Batman is nowhere to be seen and the city of Gotham has become a place of peace and mutual co-operation under the Dent Act. However, when a ruthless madman named Bane (Tom Hardy) rises from the darkest depths of the world and begins to take advantage of the city’s new-found order, Bruce Wayne (Christian Bale) is forced to call upon Wayne Enterprises’ virtuoso Lucius Fox (Morgan Freeman), conspiring cop John Blake (Joseph Gordon-Levitt) and quick-witted cat burglar Selina Kyle (Anne Hathaway), and once again dons the Batsuit.

With a narrative that’s relatively straightforward and easy to follow, The Dark Knight Rises sees writer and director Christopher Nolan turn in a masterful conclusion to his Batman trilogy that, while epic in both scope and scale, is much more rustic and rooted in the here and now than expected. That isn’t to say it skimps on the elevated action sequences, swift twists and turns, or those well-placed moments of sheer frenzy that spark unadulterated reactions. It’s also noticeably less talky than The Dark Knight, yet remains as concerned with real-life issues and identifiable characters, which are welcomed feats.

Those same issues are commendably channelled through the fear that Bane’s (complete with mask and muffled speech) unfaltering menace and determination to overturn commonplace dynamics within society instil; a villain trained to a higher, psychologically stronger level of command. Bane’s own stature and lack of moral compass hints upon a variety of existential issues such as terrorism and corruption that play into the world as we know it today, making the realistic way in which he carries out his wicked plan all the more unsettling.

As unnerving, intrinsic and well-constructed as Nolan and Jonathan Nolan’s screenplay is, The Dark Knight Rises can’t help but weaken after its initial setup. The momentum soon dwindles as the film settles down to a slow murmur in its second act, with focus frequently shifting between several points of view and plot strands, some of which are more interesting and necessary to the main crux of the narrative and overall pay-off than others. The performances, however, are all top-notch. Hathaway and Gordon-Levitt in particular deserve high praise for their turns as Kyle and Blake, while Hardy is excellent as Bane.

That isn’t to say that the Nolans don’t handle the epic task at hand well, though, as they do. The many plot strands that do count, from Kyle’s double-dealing to Commission Gordon’s  (Gary Oldman) intrepid skills as a detective and his steadfast efforts to redeem himself from his dishonour (the citizens of Gotham are left in the dark as to the exact details regarding Dent’s death), interlace almost perfectly come the final act. There are also hefty doses of welcomed wit and comic book references that are more than likely to draw instant smiles and delight from familiar audiences.

It’s in Christopher Nolan’s ability to construct heart-stopping and towering, yet equally articulate, action sequences, however, that serve The Dark Knight Rises best. Where some film-makers rely on the use of action to provide mindless entertainment, such scenes are used here only when necessary, and predominantly in ways which further the realism rather than diffuse it. The visuals are superb, as cinematographer Wally Pfister employs low-hanging camera angles to throw audiences head-first into the action, and warm colours to display a city that, while crippled and broken, is worth the lengthy efforts employed in a bid to save it from total undoing.

Leaving aside the minor flaws that arise from its sluggish middle act and bulky, intermittently unfocused scope, The Dark Knight Rises is hugely impressive. What more is that it’s a beautifully constructed, captured and serviced piece of film-making that not only works as a fitting conclusion to a widely praised trilogy, but a stand-alone film in itself. With an ending that will undoubtedly spark debate and a scattering of award-worthy performances from its proficient, tenacious and unreserved cast, The Dark Knight Rises is remarkable, but not quite a classic.