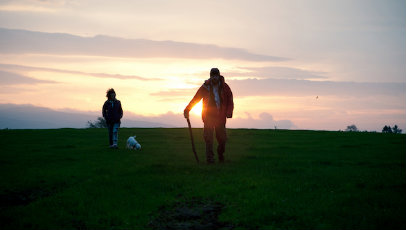 Tina (Alice Lowe) is struggling to cope with her overbearing and devious mother, Carol (Eileen Davies), and the recent – and accidental – death of their beloved dog. When new boyfriend Chris (Steve Oram) invites her on a week-long caravanning trip, Tina sees it as her chance to escape the confines of her council house and embarks upon what promises to be a week filled with sex, romance and adventure. Unfortunately for her, the trip quickly spirals out of control after a spot of careless driving.

Ben Wheatley’s third directorial effort, and arguably his most muted yet, comes from a screenplay co-written by leads Lowe and Oram (with additional material provided by Amy Jump). Built up around two characters who share a mutual fear of loneliness and worthlessness, each of whom have their own troubled backstories that are cleverly obscured, Sightseers manages to be as wildly entertaining as it is thoroughly astute and unequivocally British.

The script startles and stuns with its effortless blend of dark humour, forthright violence and seriously flawed characters attempting to find comfort and peace with one another. As the trip advances, and Tina and Chris warm to one another’s personalities after initial bouts of hesitation and unsureness (Tina isn’t used to the freedom, while Chris struggles to open up), so too does the bloodshed. But it’s all cleverly contrasted by the romance that blossoms between them and the beauty of the expansive and symbolic countryside they roam.

It’s all kept to a cursory pace, with Wheatley utilising quick-cut techniques to create a sense of unease that runs from start to finish. The violence, though intermittent, runs riot throughout the film thanks to the way in which Wheatley indulges in the aftermath and how Tina and Chris essentially switch roles as their murderous spree deepens. It makes the quieter, more intent moments, such as a scene that shows Tina writing a cry for help with an enormous novelty pencil on a loan outing to the Keswick Pencil Museum, all the more potent.

Lowe and Oram, for all intents and purposes, Sightseers’ shining beacon. Lowe wonderfully captures the timidness of Tina as she’s let loose into the world for the first time. It makes her unfolding seem all the more natural, particularly in how she assumes Chris’ behaviour to be somewhat normal. Oram, meanwhile, hides Chris’ many layers behind a cool, self-important shell that makes his underlying thoughts and intentions all the more distressing.

Their sizzling, staggering chemistry is authentic, and the ever-changing, voluminous and unsettled countryside accentuates it to a tee. To them, however, the serenity and barrenness of the setting is merely a tool for them to abuse and exploit, and that, in turn, makes their exploration all the more troubling. With Sightseers, Wheatley, Lowe and Oram have created a darkly comic, twisted and inherently British film about lost souls and their attempts to find a purpose in life. It’s a pity, then, that it frays at the seams come its inevitable end.