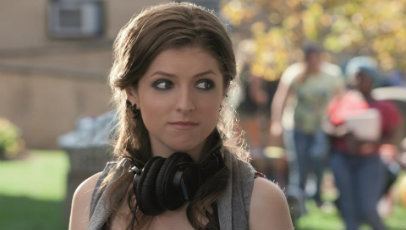 The world of collegiate a capella (college-backed singing groups who perform entirely with their mouths) comes under focus in Universal’s new ensemble comedy Pitch Perfect. In a world where musicals are either as camp and dewy-eyed as Glee, or as irksome as Rock of Ages, Pitch Perfect – from producer and co-star Elizabeth Banks – comes as a welcome surprise with a sharp script, lifelike characters and an unavoidably infectious and buoyant soundtrack.

Beca (Anna Kendrick) is a no-nonsense college freshman and aspiring DJ and music producer who’d much rather spend time mixing music than attend classes and make use of her free scholarship provided to her by her father (John Benjamin Hickey). But when he coerces her into showing more spirit, she warily opts to become a member of The Bellas, an all-female a capella outfit shepherded by lasting members Aubrey (Anna Camp) and Chloe (Brittany Snow) that’s in desperate need of some new blood and a successful mass revival.

It’s not all plain-sailing for Beca, and former 30 Rock writer Kay Cannon throws in a number of other obstacles – a rivalry with fellow a capella troupe The Treblemakers and a troubled romance with affectionate freshman Jesse (Skylar Astin) – to add spice to the otherwise calculable narrative. Beca’s self-discovery remains at the forefront, however, and Kendrick’s willing performance allows for the audience to invest unreservedly in her transition from petulant rookie to victorious lead.

There’s oodles of fun to be had as Beca’s personality flourishes, rif-off’s take place and The Bellas adapt themselves, much to Aubrey’s reluctance and wavering stress levels (she’s prone to projectile vomitting when under severe pressure). And, although Cannon’s script all too easily conforms to a conventional framework that can be traced back to such films as Bring It On and Mean Girls, there’s a surprising level of depth on display, and the odd infusion of tactical wizardry achieved by first-time director Jason Moore renders any pitfalls inferior to the shining exuberance.

It’s through the sheer peppiness and perfect amalgamation of heart, sharp one liners and charismatic characters (Banks and John Michael Higgins steal their brief scenes as a capella commentators, while Rebel Wilson scores big laughs and steals many scenes as Fat Amy) Pitch Perfect hits such highs. The fact that it comes laced together by a soaring, lithe soundtrack that effortlessly blends the old and the new and clocks in at a sleek run time of 112 minutes makes it a complete and utter delight. It’s one you’d be foolish to miss.