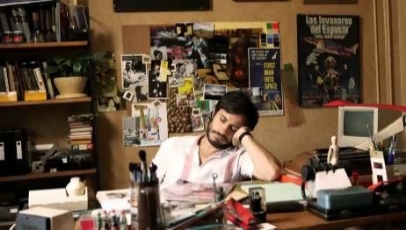 Chilean writer and director Pablo Larraín’s thought-provoking and captivating No, which is loosely based on an unpublished play written by Antonio Skármeta, focuses on the media campaign that played a significant part in military dictator Augusto Pinochet’s downfall from Chilean rulership. It sharply brings to a close Larraín’s trilogy of Pinochet-centric films, which also includes Tony Manero and Post Mortem.

In 1988, a referendum is called for to decide whether or not Pinochet will remain in power for an additional eight year run. The leaders of the opposition appoint keen advertising exec and regular skateboarder René Saavedra (Gael Garcia Bernal) to spearhead their “No” campaign, which includes nightly fifteen-minute long television adverts. With only limited time and resources at their disposal, René devises a bold and daring plan to convince voters of Pinochet’s immoral ways.

Filmed with a U-matic camera that captures the vintage, coarse aesthetic of the late 80s, No paints an authentic and powerful portrait not only of the unstable plebiscite itself, but also of René’s undeterred efforts to motivate and direct his team in conceiving and mobilising a logical, yet unparalleled campaign. He’s driven not by money or status, but by a desire to save his country from Pinochet’s control and protect his family.

This makes No more of a personal and heartfelt insight into René’s situation and the final months of Pinochet’s leadership, with Larraín opting to have the more politically-heavy observations bubble under the surface for those wishing to dig that bit deeper. It’s a clever approach, and allows for the audience to empathise with René and understand why he’s so passionate and so driven to make the campaign a success, even in spite of the hate aimed towards him, his team and their efforts.

Larraín doesn’t only succeed with his well-layered, intimate and captivating script, but also with his direction. His decision to shoot with a U-matic camera may prove distracting to some (it takes some time to adjust to), but that, coupled with the stellar work delivered by both the production designer and the costume designer, ensures the film feels as realistic and accurate as possible. It helps also that Larraín is able to seamlessly weave in archival footage to terrific effect.

It’s improved further by a alluring lead performance from Bernal and a suitably low-key, almost purring soundtrack composed by Carlos Cabezas. No’s best attribute, however, and what awards it with a neat satirical edge, is the dark humour that’s evoked through the upbeat, sardonic ads the “No” campaign develop and how the subliminal messages contained within them can influence the voters in a valuable, life-changing way.

This is review was originally posted on HeyUGuys.