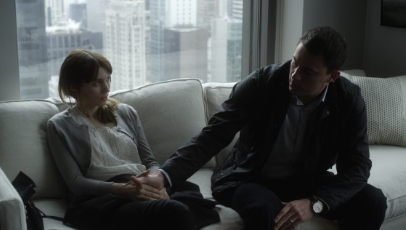 Steven Soderbergh’s swan song (his Liberace biopic Behind The Candelabra will air on HBO later this year) sees the esteemed director re-team with Contagion screenwriter Scott Z. Burns for a taut, artistic and unsettling psychological thriller set against the world of mental health. It is a place where abhorrent pharmaceutical industries are benefitting from modern societies increasing reliance on anti-depressants, regardless of their destructive and addictive side effects.

Emily (Rooney Mara) is reunited with her husband Martin (Channing Tatum) following his release from prison. Unable to cope with the added strain placed upon her, Emily slips into a state of depression, leading her into the care of psychiatrist Dr Jonathan Banks (a career best Jude Law), who prescribes her a concoction of medication, including the newly sanctioned anti-depressant Ablixa. However, when the experimental drug results in some unexpected side effects, Emily’s life soon starts to unravel in a series of shocking events.

Side Effects establishes itself first as a slow-burning and nuanced character study of a woman consumed by depression.  One who not only becomes a victim to the medication that’s supposed to help her, but also to the companies and people (Dr Banks in this case) supplying her with them. It quickly – and effortlessly – transitions into an edge-of-your-seat thriller that becomes far more interested in the legal implications and various acts of duplicity behind Emily’s nightmare than the drugs themselves.

It’s a tonal switch handled with skill as the narrative continuously defies and subverts the audience’s expectations, which in turn maintains an unfaltering interest from start to finish. While Burns’ preference for thrills and an all too neatly tied up ending unfortunately causes Side Effects to lose some of its edge partway through, the way in which Soderbergh’s methodical, clear-cut direction adds resonance, authenticity and a level of unease to Burns’ complex narrative ensures that it remains constantly compelling.

There’s a lot of social commentary bubbling under the relatively black-and-white surface, the most significant being how people have become too ignorant to the damage “quick fixes” can cause. Yet Burns and Soderbergh choose to let this slip into the background rather than let it overwhelm the narrative. Instead, they rely on the realistic, restrained performances delivered by the entire cast to provoke and perturb. Mara, in particular, is instrumental in Side Effects being the captivating, multi-layered and expertly-woven thriller it is.