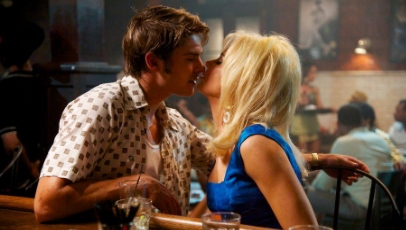 Set in the blistering, sweaty heat of 1960’s Florida, The Paperboy – Lee Daniels’ star-studded follow-up to the Academy Award winning Precious – is a pup-noir crime thriller wrapped in a web of intrigue that’s as trashy and provocative as it is alluring and enormously entertaining. Ward Jansen (Matthew McConaughey), a newspaper reporter, returns to his hometown with partner Yardley Acheman (David Oyelowo) to uncover a salacious story of murder.

With the aid of Ward’s college dropout brother, Jack Jansen (Zac Efron), and Charlotte Bless (Nicole Kidman), a deranged, sex-obsessed floozy, Ward and Yardley attempt to prove Hillary Van Wetter was wrongly incarcerated for the murder of an corrupt local sheriff. However, as the heat of the Florida bayou intensifies and Jack’s overwhelming lust for Charlotte complicates matters, the investigation take a turn for the sinister.

Revised from Pete Dexter’s novel of the same name, The Paperboy doesn’t boast a particularly arousing central narrative, and it’s made all the more uninteresting by how wildly unappetising Hillary is presented and the fact Daniels opts to focus more on the brewing relationship between Jack and Charlotte, leaving an irritating voiceover to fill in the blanks. Yet it’s nonetheless entertaining and beguiling enough to keep audiences invested.

It’s ability to captivate in spite of its innumerable discrepancies has more to do with Roberto Schaefer’s heavily stylised cinematography – the film is shot on 16mm stock which adds a rugged, clammy texture to proceedings – and the twisted, dishonest and sex-obsessed characters that populate the narrative than whether or not Hillary – Cusack playing brilliantly against type as an heavily unappetising swamp-dwelling crook – is a murderer.

Kidman delivers an undeniably fascinating and strong performance as the unbalanced, erotically-charged Charlotte (her delivery of the smutty and promiscuous dialogue is spot-on), and her chemistry with Efron, who has come on leaps and bounds since the days of High School Musical and spends most of the film in tight white revealing briefs, is constantly seductive, most memorably in a scene that finds them briefly escape their woes while dancing in the rain.

Daniels attempts to weave weightier themes of racism, sexuality and rape into proceedings through violent images (Ward face-down in a motel room in a pool of his own blood being the most striking) and cutting dialogue, though they don’t quite achieve their necessary intent. Daniels’ impressive voice and ambition must still be commended. The Paperboy, however, works best as a scuzzy, trashy and rousing concoction of violence, sex, murder and teenage lust, and it does that mighty well.