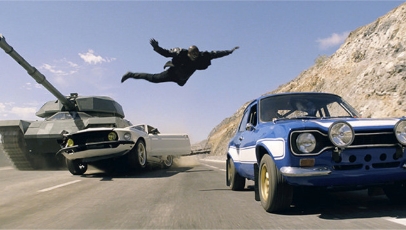 Twelve years after the first instalment crashed into cinemas, and the absurdly over-the-top Fast & Furious series is still plumbing new depths in a bid to entertain, dazzle and satisfy its audiences burgeoning expectations. It’s a relief, then, that Fast & Furious 6 matches expectations to earn its place as a worthy, if not better, successor to Fast Five and a preposterously rousing blockbuster on its own merits.

Fast & Furious 6 sticks closely to the mould that helped propel Fast Five to the impressive sum of $625M worldwide. With a script written by returnee Chris Morgan that’s sketchy at best, and a villain whose motives are never expanded upon outside of the initial explanation  the weight of the film falls heavily onto other elements to pick up and stack and raise its status, and once more director Justin Lin more than proves his worth.

The set pieces are bigger and more bombastic than ever before, with a leap from one car to another that seemed like such a challenge in the earlier films now made to seem as easy as pie, only to be replaced by an insane chase along the longest runway ever. To say the action involved was unrealistic would be an understatement (there’s even a warning message at the end to advise people not to attempt the stunts at home), but when they’re this fun, it’s not worth over-analysing.

It’s the moments in between the set pieces that brings the film down. The series has never claimed to boast comprehensive narratives, but there’s absolutely no character development whatsoever here, to the point where whenever screenwriter Chris Morgan attempts to add any kind of emotional depth to film, they always turn out to be so laughably sleazy that it’s baffling as to why they bother in the first place.