Cars fly and worldwide destruction ensues in Fast & Furious 7, yet the distinct – and increasing – cracks under the bonnet are hard to contest. Dominic Toretto (Vin Diesel), Brian O’Connor (Paul Walker) and their crew are forced out of retirement and into a cat-and-mouse chase when Deckard Shaw (Jason Statham) seeks revenge for his brother’s hospitalisation. END_OF_DOCUMENT_TOKEN_TO_BE_REPLACED

The latest in a long line of trashy action thrillers spearheaded by French producer extraordinaire Luc Besson, Camille Delamarre’s Brick Mansions – an American remake of 2004 parkour-driven French adrenaline-pumper District B13 – is just about as mindless as they come. The late Paul Walker, who tragically died last November, stars as protagonist Damien Collier, an undercover cop who accepts an assignment to infiltrate an infamous and high-risk housing complex deep within a fictional Detroit.  END_OF_DOCUMENT_TOKEN_TO_BE_REPLACED

Twelve years after the first instalment crashed into cinemas, and the absurdly over-the-top Fast & Furious series is still plumbing new depths in a bid to entertain, dazzle and satisfy its audiences burgeoning expectations. It’s a relief, then, that Fast & Furious 6 matches expectations to earn its place as a worthy, if not better, successor to Fast Five and a preposterously rousing blockbuster on its own merits. END_OF_DOCUMENT_TOKEN_TO_BE_REPLACED 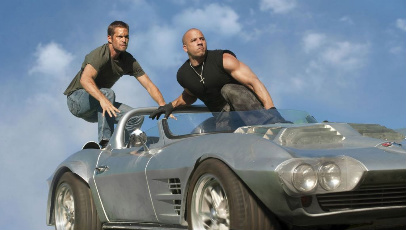 Former cop Brian O’Conner (Walker) partners with ex-con Dom Toretto (Diesel) from the opposite side of the law. Ever since Brian and Mia Toretto (Brewster) broke Dom out of custody, they’ve blown across borders to elude authorities. Now backed into a corner in Rio de Janeiro, they must pull one last job in order to gain their freedom.

As they assemble their elite team of top racers, the unlikely allies know their only shot of getting out for good means confronting the corrupt businessman who wants them dead. But he’s not the only one on their tail. Hard-nosed federal agent Luke Hobbs (Johnson) never misses his target.

When he is assigned to track down Dom and Brian, he and his strike team launch an all-out assault to capture them. But as his men tear through Brazil, Hobbs learns he can’t separate the good guys from the bad. Now, he must rely on his instincts to corner his prey… before someone else runs them down first.

The plot – while obviously simple, heavily flawed, and packed full of ludicrously clichéd dialogue – has a certain charm that helps every moment of inept absurdity slide and encourages you to lose yourself in the dumb action.

Kudos goes to Lin, who directs with passion. Despite his tendency to blurriness in action sequences, the stunts are practical and realistic while being viscerally powerful and hugely entertaining. The car scenes, in particular, are shot with a superb attention-to-detail. He clearly knows his crowd, and has tailor made the film to appeal squarely to them.

As far as performances go, it’s an entirely mixed bag. Diesel is solid as Dom, and Johnson is a welcome addition as the heavily aggressive yet darkly humorous Hobbs. Meanwhile, Walker feels out of place, like his character’s been worn too thin, and while the inclusion of past characters is welcome – helping you to ignore the gaping plot holes – they simply don’t have enough screen time to be anymore than that.

Fast Five is, for long-standing fans of the Fast & Furious franchise and action lovers, simply an unabashed popcorn entertainment flick. For those adverse to the genre, however, it’s pretty non-descript.