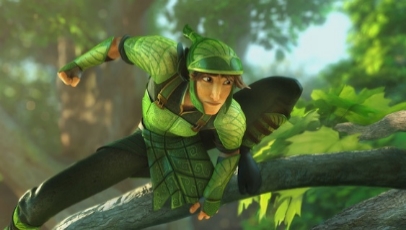 Aside from the ridiculously successful Ice Age series, Blue Sky Studios haven’t exactly had the best luck, releasing mediocre film after mediocre film that have each failed to set the box office alight. The latest of which, Epic, fails to alter that cursed streak. Hailing from director Chris Wedge, this FernGully-like animated fantasy-adventure offers very little that hasn’t been seen or done before.

While trying to reconnect with her science-obsessed father (Jason Sudeikis) after the unfortunate death of her mother, M.K (Amanda Seyfried) finds herself shrunk down to the size of a tiny army of forest-dwellers. Here, she must help them to protect a crucial plant bud that bears the key to the forest’s future from the Boggens, while also finding a way to return to her own life.

There’s no affliction in saying that Epic is a beautifully rendered piece of animation; the rich landscape is imbued with bright colours and distinctive creatures that deservedly calls attention to the animators meticulous care and diligence. Wedges’ direction, too, is commendable, and the world he’s created feels adult-like in comparison to his past films, Ice Age and Robots.

Sheer visual amazement isn’t enough though, and its disappointing to discover that there’s very little beneath the surface. The script, which is partly based on the William Joyce’s novel The Leaf Men And The Brave Good Bugs, is so run-of-the-mill and fearful of embracing that adult quality, with the writers slotting in dopey humour – most of which comes from Chris O’Dowd and Aziz Ansari as a slug and a snail – in an effort to appeal to the younger demographic.

Sure, there’s neat ideas deployed here and there, and the scenes involving chases through the labyrinthe forest are moderately thrilling, but it’s difficult to get truly caught up in the action when everything feels far too watered-down for its own good. The voice work, too, is conventional at best, with none of the actors delivering particularly stand-out performances.

In many ways, Epic was always set to fail on one level or another thanks to the hard-to-reach definition of its own title. Wedge tries and tries to breathe life into the film, and his efforts deserve to be commended, yet it’s never enough to make Epic any more than a simple ordinary film. Where Blue Sky Studios go from here is anyone’s guess, but they’ve not exactly made the future easy for themselves.