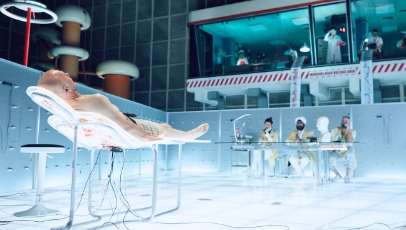 Five year’s since the release of The Imaginarium Of Doctor Parnassus, Terry Gilliam returns with the intriguing, yet much too scattered sci-fi fantasy The Zero Theorem. Set in a dystopian, tech-obsessed future, it starts well and boasts a strong performance by Christoph Waltz as computer hacker Qohen Leth, who loathes the chaotic environment of ManCom and so is relieved when Management (Matt Damon) assigns him to a different task: determining the Zero Theorem. Qohen, however, is distracted by his pining for a phone call that he believes will explain the meaning of life, and by the arrival of the beautiful Bainsley (Mélanie Thierry) in a film that contains a number of interesting ideas and concerns – namely of technological advancements and authoritarian regimes – within Pat Rushin’s convoluted script, but ultimately loses itself under the strain of Gilliam’s endless existential theories.