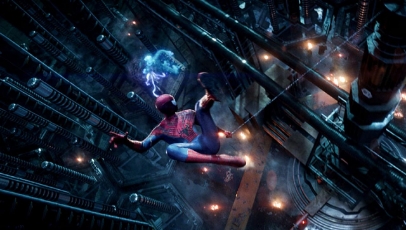 If the entirety of The Amazing Spider-Man 2 was as convincing as the scenes shared between returning stars Andrew Garfield and Emma Stone, then the film would be an unmitigated success. Unfortunately, as it stands with its overstuffed narrative and cavalcade of uninspired villains, the film isn’t much better than its predecessor. With alter-ego Spider-Man riding high, Peter Parker (Garfield) is trapped, unsure how to sustain his relationship with Gwen without putting her in danger and failing in his efforts to understand more about his past. Those are minor issues, however, as he also has the super-charged Electro (Jamie Foxx) and old friend Harry Osborn (Dane DeHaan) to deal with. A lot happens over the course of The Amazing Spider-Man’s prolonged 142 minute run time, but only a fraction of what the screenwriters throw at the script sticks. It’s a real testament to the belief that less is more, as the film soars most when kept light (the scenes that focus on Peter’s inner conflict and his on-off romance with Gwen are particularly well built), yet slumps half-heartedly when the ante is upped and action rules. The visuals, in the films defence, are more confident this time around, and director Marc Webb showcases his maturation through the dazzling web-slinging scenes that see Spider-Man float – with exuberance – through the criss-crossing streets of New York. He also coaxes out tremendous performances from Garfield, Stone and DeHaan, who all emerge victorious from the rubble. It’s never enough though, and the films myriad of problems, from the characterisation of auxiliary characters (Electro is an extremely unconvincing and quite frankly dull villain) to its insistence on laying the preparations for future instalments and spin-off’s, weigh heavy and ensure The Amazing Spider-Man 2 is thwarted at every turn from hitting the heights it so desperately tries to reach.