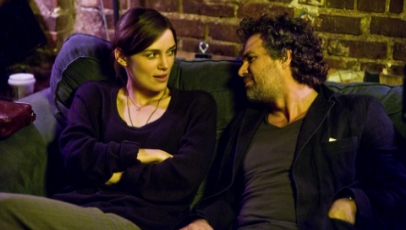 Ten year’s after soaring to success with his breathtaking low-budget directorial debut Once, writer and director John Carney returns to our screens with Begin Again, a more polished, yet no less triumphant musical drama. When left betrayed by her long-term boyfriend, Gretta (Keira Knightley) finds herself unstuck in New York City – until she meets Dan (Mark Ruffalo), a down-on-his-luck record producer, who hones in on her raw singing talent. Oozing with heart and soul from the outset, Begin Again is another likeable and surprisingly poignant effort from Carney. The narrative may, at times, reek of familiarity, but there’s a few unexpected twists throughout, and the characters – the supporting cast, included – are well written. Knightley and Ruffalo deliver beautiful, rich performances as Gretta and Dan, two lost-souls who are reshaped and thrust forward by music, and the chemistry between them is unmistakable, especially during a night-time trek around the city (captured beautifully by cinematographer Yaron Orbach). As much as it sometimes feels like a big-scale version of Once, Begin Again succeeds on its own two feet, thanks to an absorbing narrative, authentic characters and Carney’s subtle, true to life directorial style.