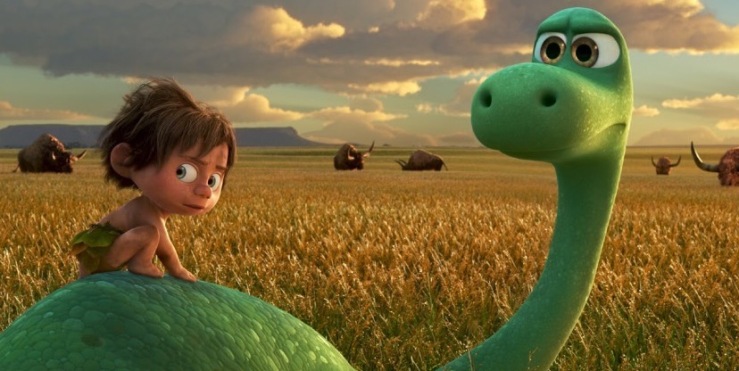 The Good Dinosaur is the second Pixar film this year – a warm-hearted, if unmistakably flat adventure that imagines a world in which the asteroid that wiped out the dinosaurs missed Earth completely. Arlo (Raymond Ochoa) is the focus, a small and timid Apatosaurus whose fear always holds him back. He’s forced to challenge himself, however, when a series of unfortunate events sees him washed up way down river, with only a wild cave boy – whom he names Spot – for help in returning home. The expansive mountainous terrain covered throughout the course of the film is beautiful, the photorealistic animation sparkling with vivid detail and enchantment. But it’s an immersive backdrop that feels at odds with the bland narrative and familiar script, and any sense of depth is limited only to the satisfying relationship between dinosaur and boy, two wildly different characters – in personality as well as species – brought together by the tough elements. The various obstacles that lie in Arlo’s way are barely felt, and his self-discovery is notably tepid. There are touches of cleverness, like the fact the Apatosaurus are farmers and the raptors come bearing the feathers scientists have proven they had, and the premise is certainly clever. But it never comes together as a cohesive whole, and the simplicity of the narrative is poor in comparison to the splendour of the visuals.