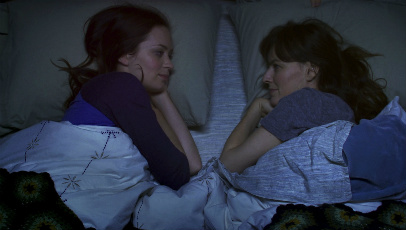 Unable to recover from the untimely death of his brother, Jack (Mark Duplass) is sent to a picturesque cabin on a tiny island by best friend Iris (Emily Blunt). Arriving at the cabin, Jack runs into Hannah (Rosemarie DeWitt), Iris’ half-sister, who’s taken shelter there after running out on a seven-year-long relationship.

Nursing their respective troubles over a bottle of tequila, Jack and Hannah find themselves sharing a night of passion, only to be rudely awoken by the unexpected arrival of Iris, who’s come to keep Jack company.

Utilising a part-scripted, part-improvised approach, Your Sister’s Sister boasts a level of honesty and sincerity that’s usually missing in films of its nature. Though mostly hinged upon the lengths Jack and Hannah reach to ensure Iris doesn’t find out about their one night stand, writer and director Lynn Shelton touches on several important themes, particularly in the bereavement process experienced by Jack and the unspoken sibling bond between Hannah and Iris.

What transpires isn’t all misery, though, as Shelton keeps the tone surprisingly light, never revelling too long in the darker moments and the baggage each character bears. Directing from a distance, with an optimistically polished, crisp sheen and a calming soundtrack, she ensures the actors are allowed plenty of space to embody their characters, making them, and the situations they find themselves in, as realistic and relatable as possible.

It’s a smart move, as some of the best, and funniest, moments occur from the rapport built between the trio and the touching interplay they share (a pancake incident immediately springs to mind). No matter how skilled Shelton is at writing for troubled characters, the film is at its best when it lets the trio’s interactions come naturally, whether it be through the long walks in the woods, or cuddled up heart-to-hearts. Only at the end, when the outcome of the twist falls back onto a trite outcome does the film lose its balance.

Thankfully, the actors’ chemistry and extraordinary talent shines through to smooth over any semblance of a crack. Duplass, a master of improvisation, radiates, masking Jack’s various insecurities behind an outer comic buffoon. Blunt, who could be said to have the easier role of the three, comes across as charming as ever as the bubbly Iris, the cement holding the trio together. It’s DeWitt who stands out though. Her Hannah is dry, reckless and immature to an extent, acting on impulses which land her in all sorts of trouble.

Your Sister’s Sister rises above its simplistic conceit to become a smart, perceptive and witty three-hander that explores some deep issues while maintaining a consistently quick-witted effervescence to ensure it doesn’t wallow in its own despair. Duplass, Blunt and DeWitt fit Shelton’s world with an ease that allows the film to become much more than its initial set up would lead one to believe.