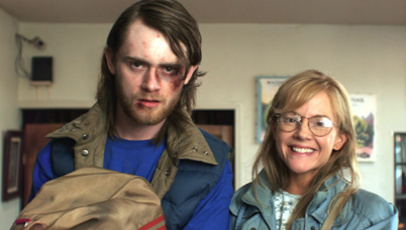 Loyal Christian housewife Linda (Rachael Harris) enters into panic mode when her husband, Peter (Jon Gries), suffers a stroke. Discovering that he’s been donating sperm in secret, she sets off to find his eldest “son”, Raymond (Matt O’Leary), a foul-mouthed ex-con. Realising she’s worlds apart from Raymond in terms of beliefs and values, Linda has a mammoth task ahead of her to ensure Raymond is able to reunite with his biological father before it’s too late.

A road film of sorts, Natural Selection bathes in the encumbrances of the clashing of Linda and Raymond’s personalities, pointed out early on when Raymond declares, “you’re a clean angel, and I’m a dirty, ugly monster.” Brought together by circumstances neither of them had any control over, they are forced to cope with one another for better or worse. The return trip feeds out a tidal wave of tender, humorous and cringeworthy moments.

Initially, they rub each other up the wrong way: Linda with her compassionate, moralistic viewpoint and love of Christian music; and Raymond with his unconventional, live life for the moment attitude and drug addiction. As they spend more and more time together and open up about their pasts, however, their differences start to dissolve. What’s replaced is an eery compassion for one another – something beautifully captured by Steve Calitri’s down-to-earth cinematography and the relaxed tone that encapsulates the whole film.

The real skill, however, comes in writer and director Robbie Pickering’s ability to carve a believable and entirely heart-warming story, despite the obvious acrimony of the situation. It may be pierced throughout by pop songs and an unnecessary sub-plot that involves Linda’s priest tracking her down after sensing she’s in real danger, but the beauty stems from the quieter, more reflective moments where these two are able to warm to each other and share their troubles, in a way that will likely improve their attitudes towards certain issues for the better. When it comes, the ending feels true to where these characters came from and where they are now – something that most films fail to achieve.

The performances are what makes Natural Selection come alive. Harris, who’s an incredibly underratedactress, thrives as Linda. By inhabiting her as a demure lady lost to religion towards the beginning, it makes her transition all the more satisfying and realistic. O’Leary shares some real chemistry with Harris, which injects some much welcomed humility into their awkwardly burgeoning relationship. The supporting cast are all fine, but it’s Harris and O’Leary’s film, and Pickering does well to keep it that way.

Natural Selection is, when broken down, decidedly simple. Pickering is able to touch upon relatable issues while maintaining a light, witty and brilliantly queer tone. It’s unknown whether the film would’ve reached the same heights without the impeccable talents of Harris and O’Leary, but it’s hard to think who would play these lost characters with such honesty. Whoever’s decision it was to cast them deserves a raise, and a massive pat on the back.