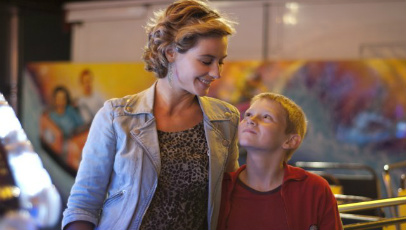 Disregarded by his father (Jérémie Renier) for no apparent reason, Cyril (Thomas Doret) longs for a normal childhood and to escape the children’s home he’s been placed in. He sees a new opportunity when he happens upon friendly mother figure Samantha (Cécilie De France), who agrees to take care of him on weekends, but his turbulent past leaves him unsure how to handle his emotions and new found security.

Slight, yes, but that’s what makes The Kid With A Bike such a tender, heart-warming and true-to-life depiction of the innocence of childhood and one child’s longing for acceptance and love. Whatever the reasons for his father’s inability to care for him, Cyril isn’t always inclined to try and understand the decision. He tests both himself and those who attempt to look after him as a means of bringing attention and making people take notice.

It’s an interesting, and very intelligent way of grounding this story in realism. The fact that, despite being pulled in a multitude of different ways (from assisting a well known drug dealer to stabbing Samantha in an act of aggression), all Cyril wants is to enjoy the simplicity and carefree nature of childhood – represented by his desire to reconnect with his father and the lengths he goes to to ensure the one object he has in the whole world, his bike, stays close to him.

It’s very much a down-to-earth, simplistic film – one that’s never influenced by outside elements, such as the mise-en-scene or cinematography. In fact, the techniques they opt for – seeing as Jean-Pierre Dardenne and Luc Dardenne both wrote and directed the film themselves – never in any way disrupt the natural flow of the story. Instead, they work in turn with it, basking in the happy times and shrouding the glimpses of Cyril’s true loneliness and lostness in dark, enclosed, shady locations.

Not only does The Kid With A Bike come into its own due to the fact the narrative is never overcomplicated and techniques are used only to enhance audience resonance, but also due to the fact the writers know how to adapt to suit Doret’s amateur acting ability. There’s no over-the-top cries for help, just simple and subtle out-of-character reactions to draw attention to one’s self. Doret handles this well, and portrays a lot of his varying emotions through his eyes and body language, instead of falling back on tantrums and severe acts that would’ve seemed completely out of place.

De France compliments Doret well as Samantha, playing the mother Cyril never had, or at least doesn’t refer to throughout the entire film’s running time. It’s an honest relationship that develops from a simple act of kindness on Samantha’s part, and De France relishes every opportunity to ensure her on screen relationship with Doret’s Cyril is truly reflective of the bond between a child and a foster parent.

The Kid With A Bike is a simple tale of one child’s desperation to cling to any semblance of childhood and love he has left in the world. It’s not to be taken lightly, however, as the Dardenne brothers layer their narrative well to ensure the ever so slight cracks – the lack of backstory and reasoning behind the entire situation is a little off-putting – forever remain in the background. It’s a lovely little film with two actorsdelivering winsome performances.