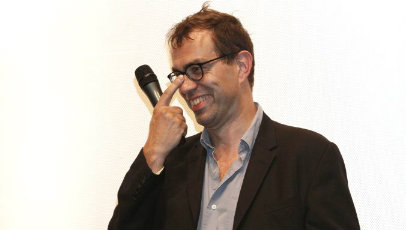 As of last Friday, The Monk, the latest adaptation of Matthew Lewis’ revered and controversial eighteenth-century novel, made its way into select cinemas across the U.K.

The film, co-written and directed by Dominik Moll, centers on Ambrosio (Vincent Cassel), an acclaimed monk who, after becoming entranced by a masked figure (Déborah François) who takes shelter in the monastery, is lead down a destructive path full of sin.

Earlier this year at the 2012 Glasgow Film Festival, HeyUGuys had the opportunity to speak to Dominik about what initially drew him to Lewis’ source material, how he went about bringing the themes and ideas into the 21st century and what it was like to work with Vincent Cassel.

Jamie Neish: What was it about Matthew Lewis’ source material that made you so interested in bringing The Monk to the cinema screen?

Dominik Moll: Well, several things. I think, when I read it the first time, it was purely a form of pleasure where I really enjoyed the narrative, the gothic atmosphere, the way it played out with all the elements of surrealism and the fact it was so visual. When you read it, there are a lot of images that pop up in your mind and it has a very dream-like quality, which allows a lot of freedom for interpretation. So, all these points made me think it had potential to make a great film. I was also attracted by the character of Ambrosio and the way he comes to the realisation that religion may not be enough to fulfil your life.

Was it a difficult process to adapt the material into a fluent and understandable narrative while still containing the elements of Lewis’ novel that made it so loved by readers?

Yes and no. At the beginning, it didn’t seem too difficult to make the narrative work. But then, I think, the more difficult part was to bring more depth to the character, because in the book Lewis’ interpretation of the people that represent Catholicism is quite cynical and Ambrosio, from the start, is portrayed as a very ego-centrical character who’s more concerned with his appearance than about what he’s preaching. This is something that I wasn’t particularly interested in and I thought the eventual downfall into sin would be more interesting if Ambrosio was someone who’s faith was really strong and sincere.

Did you have any actors in mind when you were writing the screenplay?

It wasn’t too complicated. The main thing was to find the right actor for Ambrosio. When Vincent Cassel’s name first came up I thought it was a very challenging and intriguing idea, especially because it didn’t seem so obvious as we’re so used to seeing him play inherently evil characters. Ambrosio was the opposite, so it seemed like a very interesting suggestion for Cassel to play someone who was really sincere in his faith. So, I felt that if he was interested in playing the role, then it would bring quite a lot of tension to the role.

Which do you prefer? The writing or directing side of things?

I think I prefer directing, because I find the writing quite difficult, long and very lonely. I mean, some people manage to write quickly and I’d really love to do that, but somehow I’m not able to. So, yeah, I think I really prefer the production and post-production.

Had you worked with the cinematographer [Patrick Lussier] before?

No, that was the first time I’d worked with him.

What was it that made you go to him in particular?

I worked with him because he had the experience to really translate what I had in mind onto the screen, and not to be afraid to try unrealistic techniques that would accentuate some of the themes integral to the narrative.

Was it important for you to strike that balance between the open space of the outside and the dark, closed in atmosphere of the monastery?

Yes. I mean, from the beginning I knew that the visuals were very important to the film, so making choices that were quite striking felt in keeping with the source material. So, the idea to have a very bright exterior contrasting against a very dark interior and the introduction of Valerio in a bright red dress where everything else was muted had a lot more to do with the imagery than anything else, particularly with the fight between good and evil that runs throughout.

The film has generally been met favourably by critics and audiences. How does that make you feel, both as the co-writer and director?

Well, I mean it’s always better when a film responds well to a film. When you make a film you hope that the audiences and the critics will like it. And, when they do, it’s always quite rewarding.

I’ve read several articles that compare your work to Alfred Hitchcock? It that something you do conscientiously, or just the style you feel most comfortable with?

I think it’s more the style I feel more comfortable with. I wouldn’t deny that Hitchcock has been – and still is – a major influence, but the important thing is choosing a style that fits the story you’re trying to tell, and that’s what I was more concerned with when shooting The Monk.

Thank you very much for your time.

This interview was originally posted on HeyUGuys.